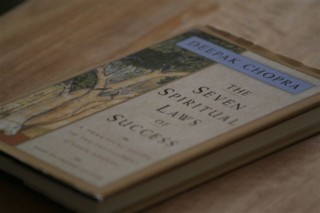 I can’t remember exactly when I first learned about Deepak Chopra but over the past couple of years, I’ve become more and more inspired by his views, music and voice.  He is simply a great teacher and philosopher.

He’s also now on the brink of becoming a bit controversial in the Christian community due to his latest book entitled, “The Third Jesus, The Christ we Cannot Ignore.” A recent Dallas Morning News article covered the book release yesterday and stated that:

“Chopra examines the teachings of Jesus not in the context of his historical existence as a rabbi of Nazareth, and not in light of the Christian belief that he is the son of God, but as ‘a cosmic Christ’ — Jesus as a state of mind.”

Last night I had the opportunity to see Deepak speak in Copenhagen and hear him speak about the “nature of human consciousness.” I also had the chance to get my book signed, which was very exciting, as well as give him a very solid hand shake. 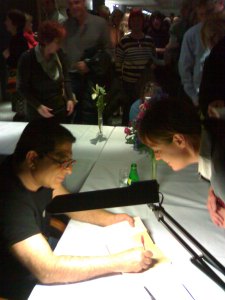 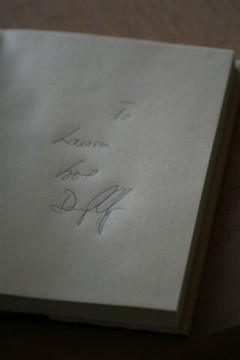 As for the speech, he covered a lot of ground. His main message was about consciousness existing in discontinuity. He spoke about the difference between happiness in ignorance versus happiness in enlightenment, the law of impermanence, Nirvana being the ultimate reality, Quantum leaps of creativity, meta-biological evolution, the non-local domain, synchronicity, hidden dimensions, and the realm of the unmanifest.

One of the things he mentioned that was a big take-away for me was that while he was researching for an upcoming book he explored the habits of some of the world’s great leaders and learned that they each sit in silence for at least five minutes every day. He said that how people see things or perceive things makes up about 80% of what determines their happiness and that less than 8% is determined by a person’s conditions for their life.

He also talked about an initiative he’s spearheading called The Alliance for a New Humanity whose mission it is to:

“connect people, who, through personal and social transformation, aim to build a just, peaceful, and sustainable world, reflecting the unity of all humanity.”

A video about the initiative can be seen HERE. And if you are interested in learning more about Deepak, visit his blog at www.deepakchopra.com or the site of the Chopra Center of Wellbeing.

All in all, it was a great experience. I am left with a new way of looking at things and a positive way of thinking. I was once again reminded of “The Power of Now,” and importance of living in the moment and letting go of the past or to “live, breath and move in the unknown.”

I saw a little bit of myself in one of Deepak’s Secrets to Enlightenment, which was that “we live in multi-dimensions.” I swear I can be in 10 places at the same time! It’s what he describes as observations coming and going, having a “there goes my body but here I am” kind of state, synchronicity, spontaneous self-fulfillment of desire, the realm of miracles, experience of immortality or feeling of/being in love. The key is to stay grounded in this state and in the body while tuning in to this realm of unlimited possibilities.

Finally, it was simply an honor to shake the hand of a person that has provided me with such a great amount of inspiration and to tell him that in person.

Like Loading...
Tags: deepak chopra, dharma, enlightenment, karma, leadersip in time, spirituality, the alliance for a new humanity, the power of now

← Presentation of Lanserhof Stay
Oh to be Danish!…and live in America! →